This year on May 10th was the annual EU Open House, where several of the EU member embassies in DC opened their doors to give visitors a taste of their homelands. I was especially thrilled not only to go but to be a part of the festivities with the Czech Republic embassy! I was contacted through a friend in the Art Deco Society of Washington DC who asked me if I wouldn’t mind walking in a 1920s fashion show at the embassy. The Czech Embassy wanted to use Franz Kafka’s Metamorphosis as their theme this year, and as Kafka was born in the modern-day Czech Republic and died in the early 20s, they wanted to also use a 20s theme to pay tribute to him as one of the most prolific writers of the 20th century.

Fun Jaye fact: I have always wanted to work in an Embassy. I applied over the years a few times, but was never qualified. Sad. And even though I was only a volunteer (and don’t have an ounce of Czech in my blood- I’m Italian and Dutch!) I was absolutely thrilled to be ‘working’ there and adding to the 20s atmosphere. I was able to learn more about Kafka, Czech cuisine and beer (pilsners originated from there!) and learn about their economy and historical sites. I’ve always wanted to go to Prague, and now it’s a burning desire!

My friend, Chrissy, from the Deco Society, and I in 1920s clothing from our private collections, along with the dapper men of the Czech community, and the lovely ladies of the Embassy and community wearing Tonak hats, a well-known Czech company.

Some friends of mine were asked to dance Charleston and Shag to music from the era provided by another lovely friend, Craig Gildner, and his band! 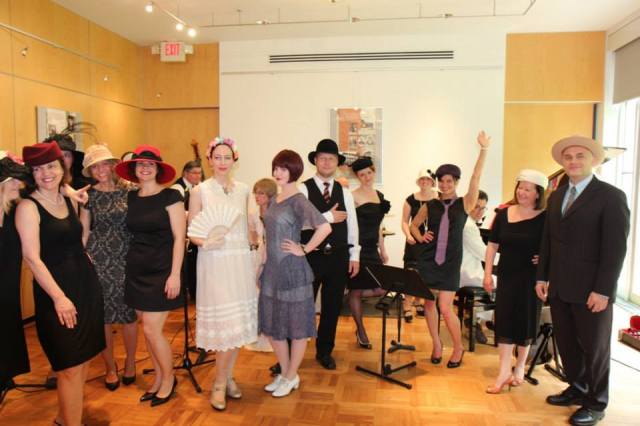 What an incredibly fun group!

I had such a great time! It was so wonderful to meet some of the Czech community, wear and celebrate 1920s clothing and be a part of such a great event. I can’t wait to go back next year and check out what each embassy does! If you’re in the DC area, you should too! Maybe we can meet up:)

A 30-something vintage clothing hoarder who also has a penchant for books, coffee, lazy days and cats.
View all posts by Baltimore Bombshell →
This entry was posted in Uncategorized. Bookmark the permalink.