Posted on October 11, 2016 by Baltimore Bombshell

Last night I teamed up with Jeff Bejma, a loca historian who just published a book on Fells Point history, for a Historical Crime Tour of Baltimore focusing on the 1850-1860s era and how essentially Baltimore earned the nickname “Mobtown.”

We had several members of the Baltimore Historical Society join us, as well as several of my coworkers and clients from the barbershop I work at.

I tried to document the evening but instead I was too engrossed in Jeff’s talk! I’m going to post info about his book soon so that anyone who is interested can check it out! 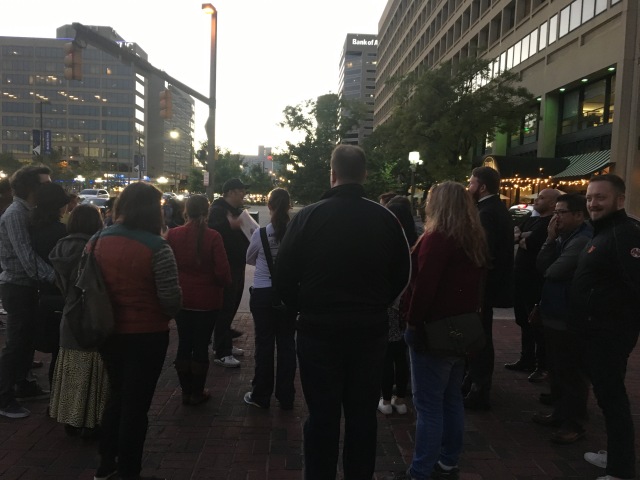 I was able to remember to take two photos- the first from the beginning of the evening at QG. Jeff is behind the bar (he’s BMore’s finest bartender!) and the second is him talking about the area where Edgar Allen Poe was kidnapped. We are standing in the Inner Harbor, and Poe had been abducted a few blocks north.

This tour really got me interested in Maryland history and Baltimore history in particular. I really want to check out the rest of the tours in the city! It being October, there’s several haunted ones here, so I think they should be the first on my list!

A 30-something vintage clothing hoarder who also has a penchant for books, coffee, lazy days and cats.
View all posts by Baltimore Bombshell →
This entry was posted in Uncategorized. Bookmark the permalink.